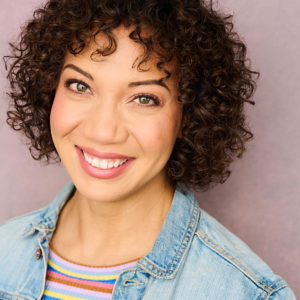 AYLA GLASS is a bi-racial, BIPOC, actor-writer-comedian born and raised in Kansas City. She grew up a die-hard musical theater kid, performing in her first professional production at 14. Ayla attended Dartmouth College where she graduated with a degree in Sociology and Film & Media Studies with a focus on Race and Ethnicity Studies. Next, Ayla moved to LA to pursue a lucrative career in… sketch comedy! While studying improv and sketch at Upright Citizens Brigade and The Pack Theater, Ayla created THE BAE*GENCY, a monthly live show featuring an all women of color sketch team and stand-ups, which ran for two years. Ayla was recently named one of 2021’s emerging writers on THE NEXT LIST by Tracking Board and Coverfly for her half-hour comedy pilot, UNEXPECTED. She was the script coordinator and writer’s assistant on MAO MAO: HEROES OF PURE HEART Season 2 for Cartoon Network, and most recently, a script coordinator on A BLACK LADY SKETCH SHOW for HBO.

Additionally, Ayla has worked at Stoopid Buddy Stoodios for many years, notably serving as an Associate Producer on the feature film CHANGELAND for Hulu.