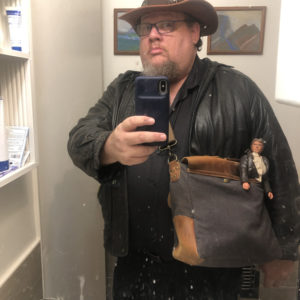 Will is just a big old fanboy.  He loves being around the theater and the performers.  Will has completed the Level I – IV Improv cycle at the Pack Theater (via Zoom in COVID) and has been a featured guest on WizWorld Live (both the twitch show and the podcast).  By day he’s a mild-mannered administrative assistant currently working in the Legal education field.  By night he can be found in the front row at such Pack shows like Jakked Wrestling Comedy and anything else that he fancies.  Way back in 1984 he was featured in the SDSU production of Peter Pan as Twin #1.  He was also a background extra in the short-film “Robo-Saints” and appeared as a body double in the short film “Eye for an Eye”.  Sometimes he writes.  He also has a kiddo who loves the Pack just as much as he does.  He graduated from UCLA in 2006 with a BA in English (at age 35)!