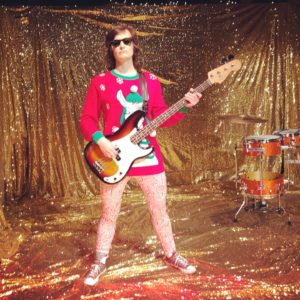 Emily is a comedian, actor, and writer originally from Chicago and now based in Los Angeles. She got her start in comedy at the age of 15, spending several years studying in The Second City’s Teen Improv program and was a member of The Second City’s Teen Improv Ensemble. They hold a BA in Theatre from Truman State University & are a graduate of The Second City Conservatory. She is a member of sketch team Goldbaby, who began as a Pack Theater house sketch team in 2018 before graduating to a weekend slot in 2022. Goldbaby has performed to sold out crowds at SF Sketchfest and was nominated for Best Comedy at Hollywood Fringe Festival 2021. Emily’s work with Goldbaby has been featured on WhoHaHa. Follow on IG: @eachamp7 Twitter: @eachamp Website: emilychamplin.com