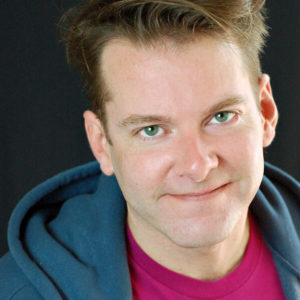 John can be seen every month with Big Yellow Taxi (one of the longest running improv comedy shows in LA) and with the improvised Tennessee Williams troupe Downtown Menagerie. He created the award-winning The Dick and The Dame: Improv Noir alongside his longtime comedy partner Stacy Rumaker, and is known for his producing, directing, writing and acting talents for shows ranging from the avant garde WPCK to the outrageous Scumbag Shakespeare. His stage play “The Rotten State” received critical acclaim, and he starred in and directed numerous
seasons of the celebrated “PL.A.Y Noir.” His work as a writer runs the gamut from television to
narrative video games (including one based on the works of Jane Austen). He co-starred and co-
produced the film “Just Business” and as far as he knows is the only actor who’s played both
Bruce Wayne and Jason Vorhees.